Thanksgiving was low-key at my house this year. Not that there isn’t an abundance of things to be thankful for, but our small multi-generational family had an abundance of plans for the extended holiday. We gathered Thursday for what was to be a simple midday meal, before scattering in different directions to enjoy the long weekend.

What was to have been a small turkey breast to serve five (with enough left for a few sandwiches) became a 12-pound turkey. (The market had no fresh breasts available, and we had not built thawing time into the schedule; the option was a “smallish” fresh bird.)

The rest of it? A mix of traditional and easy prep. One large — overly large, as it turned out — fresh from the garden salad that boasted tiny boiled potatoes, green beans and dried cranberries. Roasted yams and wild rice stood in for mashed potatoes and cornbread stuffing. Savory pumpkin gratin, recipe courtesy of Jacques Pepin, homemade cranberry-orange relish, and a freshly-baked Challah, as pretty to look at as it was good to eat, kept kitchen prep time to a minimum. 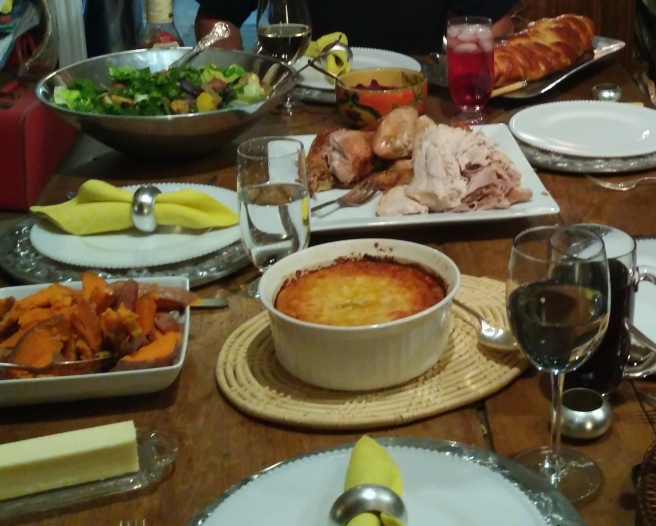 As usual, “simple” morphed into too much!

Friday, we were content with turkey sandwiches, salad and television movies. Saturday was a quiet day, with only a few must-do’s, and no plans for a “real” meal. Snacking at will was the order of the day.

When faced with options, make soup

I am grateful that my grandmothers were good cooks, and that I had a chance to hang out in their kitchens many years ago, not only during holiday preparations, but afterwards as well.

I learned the truth of “Waste not, want not,” and I learned to “make do” and make meals out of what was on hand. I also learned that simple meals are best!

Those were lessons well learned. 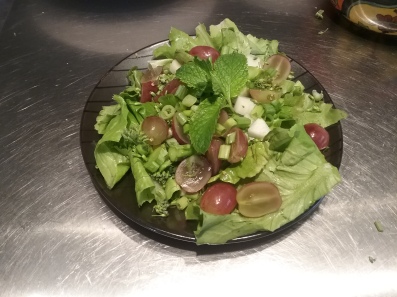 So, for Saturday supper, soup it was. Pan drippings and turkey parts that would have become gravy had we served mashed potatoes and dressing on Thursday became the catalyst. Leftover wild rice added heartiness. Fresh celery, carrots and onions, constant staples in the refrigerator crisper, are the basis of any good homemade soup, right? And leftover Challah is still delicious!

It was a large pot of soup, enough to feed son and daughter-in-law who stopped in unexpectedly Saturday evening, with enough “left over” for Sunday lunch.

No pie, you say? Well, not exactly!

It bears repeating that our Thanksgiving was pared down and simplified in many ways. There was no pie — not pumpkin, not apple, mince or pecan. No brownies, no ice cream. Apples and oranges, yes, but even they went untouched. None of us suffered from a lack of food; desserts were not missed.

However, I had purchased pie crusts, just in case. (No, I do not see any reason to make my own!)

So, for tonight’s dinner, the plan is to have Turkey Pot Pie. Actually, I can picture it already: Colorful carrots, peas and potatoes joining small bits of turkey meat, oozing with creamy goodness and threatening to bubble up through the golden crust. Chilled (leftover) cranberry sauce will add color and tart flavor to the simple dinner. With a green salad, it will be nutritious and more than ample.

Will one pie suffice to clear the refrigerator of leftovers? I am not yet sure, but if there’s enough turkey to make two, I will be happy to have an extra to pull from the freezer.

On this weekend, especially, I am thankful to have the blessings of home and family, a warm, comfortable hearth, good health and good food.