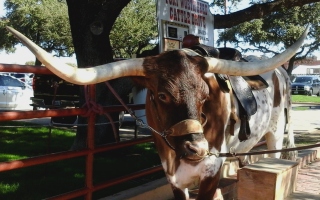 It may actually be more a lazy stroll than a “drive,” but the longhorns and the drovers never fail to gather a crowd as they appear for their twice daily parade down Exchange Street. The historic Fort Worth Stockyards District is not exactly the Old West. But when the buildings and the beasts are reflected in the sparkle of children’s eyes,  it does seem almost like the Old West. If only for just a moment.

As they parade down the cobblestone street, herded by “cowboys” on horseback, these impressive animals give us just a glimpse of that past, the time of “beef on the hoof.” Familiar cattle trails stretched like highways across the plains, into the high country and on to railheads and markets throughout the West and Midwest.

Men and animals, in those days, were both larger than life. At the heart of the legends are the longhorns and the stampedes.

Today, Fort Worth’s herd probably couldn’t even be prodded to take off running, but it’s still quite impressive to see the big beasts with their six-foot horn-spans up close and personal. It’s even possible to climb on the back of a tethered longhorn in order to pose for a snapshot.  It was a beautiful day — crisp, clear and sunny. In the stockyards district, the towering buildings of modern, downtown Fort Worth fade away.

It’s the spectacle that draws people, and although it bears little resemblance to the running of the bulls in Pamplona, to cattle drives of old, or to a working ranch, it does transport spectators back to the day when Fort Worth truly was “where the West begins.” 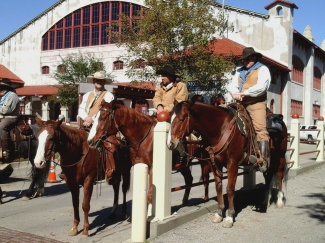 It’s the spirit of the place, as well as its heritage.

I, for one, am very happy to stand on the sidewalk, admire the architecture, speak with the patient horsemen and smile at the children who are excited equally by the horses and the “cows.” In a period of about four years from 1866 to 1870 more than four million head of cattle passed through Fort Worth, and were “driven” along the Chisholm Trail to Abilene, Kan. Then, other trails developed, as did other markets. The range was open, and beef was a diet staple.

Those days, however, actually did not last long. The growth of settlements, the arrival of the railroads and westward expansion all took their toll. The long cattle drives were hard on the cowboys and hard on the cattle, and they were over by about 1890. 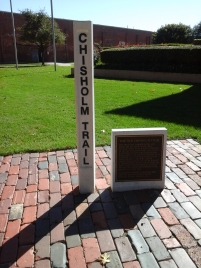 As a product of the American West, I am aware of other cowtowns: Miles City, Mont., Medora, N.D., Las Vegas, N.M. Some have played prominently in my past. I know the names — Abilene, Dodge and Wichita, Cheyenne, Greeley and Prescott; Amarillo and Wichita Falls back in Texas. I know the stories. I grew up with the lore. They all retain some of the spirit of the frontier. So, too, does Fort Worth. And that is comforting.

Even though Fort Worth is not a frontier town today, it is protective of its cowtown past and personality. These urban longhorns live on here, and they get their daily exercise by parading along a route that played such an important part in the development of the country, the taming of the West and the feeding of the nation. 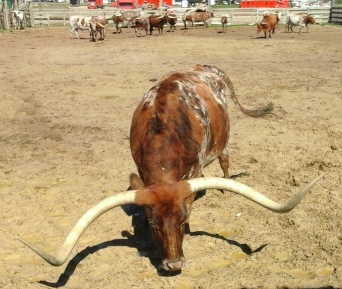 Driving around Texas, it’s still possible to spot longhorns grazing on private land. After many years, the breed is today making a comeback, not only for sentimental reasons, but also because lean beef is much in demand. Only in Fort Worth, though, is it possible to see them in this way, on twice-daily cattle drives, close enough to reach out and touch!

Not only is it worth a trip to see the Fort Worth herd; it’s a trip back in time, one that is highly recommended and fun for old and young alike.

Note: The history of the Fort Worth Stockyards is fascinating, and special events, including rodeos and livestock auctions, are still held here. Read More. In 1976, the area was designated a National Historical District.

Photograph of longhorn pair via Flickr by Amy the Nurse; all others by author.

For years, I pored over historic maps, examined old globes and spent hours looking at the edges of tattered nautical charts hoping to glimpse those letters: BHBD. 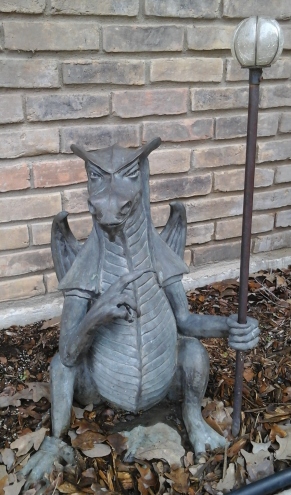 My searches never yielded any kind of “Eureka” moment, but I held fast to the romantic notion that someday I would encounter that cryptic message. Some other friends also believed the oft-repeated notion that ancient mapmakers noted the ends of the known world with the notation, “Beyond here be dragons.”

As it turns out, it simply isn’t so. And it’s a disappointment, for a lot of reasons. First, it was not just my fantasy, but a commonly held belief. I feel cheated somehow, and duped. No matter how silly it seems, I still choose to believe that out there, somewhere, there be dragons.

The notion has fueled my wanderlust for decades; I am certain that old salts and continental explorers fully expected dragons when they embarked on those journeys into the beyond. Instead they encountered wonders, and that was sufficient to keep them moving.

But do you think they secretly longed for the dragons? I still choose to believe so.

Those who today visit the depths of the oceans and those who venture into space must, I think, still be searching for them.

Back to those dragons

Truth be told, apparently, there are no maps that bear any sort of legend concerning dragons — here, there or beyond.

There is one reference — in Latin, mind you — on a small globe dating to the early years of the sixteenth century (1503-1507). It is now in the possession of the New York Public Library; it is the first to depict the Americas in reasonable perspective, and it notes “HC svnt dracones” along the eastern line of Asia.

But, even though there are other beasts on its copper surface, there are, unfortunately, no dragons. (There is also some doubt about the translation from Latin — does it really mean “here be dragons?”) Another question that will not be answered, apparently, any time soon.

The only other map that anyone can point to is a real leap for those who search for dragons on the pages of vellum. The phrase “Here There Be Dragons” was reportedly used for an unknown polar region labeled Terra Incognita on the asteroid Vesta in a paper submitted by Michael Gaffey of Rensselaer Polytechnic Institute for the planetary science journal Icarus.

Just what is it about dragons?

There are dragons, large and small, worldwide, it seems. Not only Saint George, but countless others — Norsemen and Chinese, among others — searched for and battled dragons. There are Japanese, North American Indian and Ethiopian dragons; they lived in Scandinavian, Welsh and German myth and in the mind of J.R.R. Tolkien.

There is a final reference to the phrase  (and the title of the book) by David Koerner and Simon LeVay in “The Scientific Quest for Extraterrestrial Life.”

During my travels, especially on the sea, I have over and over again scanned the horizon for dragons, just as I still sneak quick peeks at the edges of old maps. I am certain I always will.

I cannot put aside the conviction that, somewhere, beyond the known limits of the page or of this world, somewhere . . .

Koerner and LeVay say in their introduction: “The same sense of mystery, the same lure to adventure, now colors the unexplored lands of the cosmos. Welcome to the dragon hunt.”