It was a spectacularly gentle touchdown on the runway that stretched along the coast of Sao Miguel Island. So smooth, in fact, that it prompted applause from the passengers as a slightly-longer-than-four-hour non-stop flight from Boston set us down on a small volcanic island in the Atlantic still about 900 miles from mainland Portugal.

It was also only 6:30 in the morning local time, and the island looked sleepy in the slightly drizzly dawn. We had boarded in Boston at 9:20 p.m. the preceding evening, thinking that we could get some sleep on the flight, but dinner service with complimentary wine and coffee, along with a growing sense of excitement, combined to keep us awake. Any nap would have been brief.

We looked forward to picking up our rental car and were hoping to enjoy a traditional Portuguese breakfast prior to making our way to the lodgings that were to be our home for the next three nights.

Our plane stopped on the tarmac some distance from the terminal. Surprised to realize that there would be no modern jet bridge, we gathered our belongings and deplaned down the aircraft stairs, walking through the drizzle to retrieve our checked luggage in the still quiet terminal building. Even customs and immigration officials seemed less than fully awake, but they obligingly stamped our passports as they welcomed us to their island home.

A row of smiling men with hand-lettered signs awaited our arrival, and our group was transported quickly and efficiently by mini-van to pick up our rental vehicle. Once there, we were offered a home-baked treat — a cross between pound cake and tasty breakfast bread. Our hopes for a nearby eatery and a hearty early-morning breakfast, however, were dashed.

Island life, it seems, does not begin early. And, by any reckoning, 7 a.m. in vacation land is early! However, other delights followed in quick succession as we were invited to follow the man who had greeted us at the airport. He willingly led us in his own vehicle to our reserved seaside villa, even transporting some of our luggage and waiting with us until someone with a key could be located. “No problem,” he insisted, “I live nearby.” We felt welcome and already “at home.” We were charmed by the accommodations, the lush landscape, the seaside view, an outdoor covered patio, and a resident rooster! 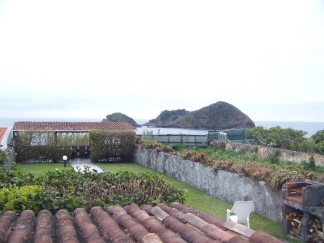 When Afonso Mela, who manages the family-owned property, arrived, he won us over by also bringing juice, milk, crackers and local beer along with iconic Portuguese

pasteis de nata to accompany our morning coffee. For the next two weeks, those custard treats would be a staple of our daily diet, for breakfast and at other times during the day.

The four of us had picked Portugal as a vacation destination for a long-awaited “cousins trip” because neither couple had been there before. It was as simple as that; akin to the way we traveled in our younger days, choosing destinations by throwing darts at a map. We knew only that Portugal is still relatively inexpensive, and that English is widely spoken.

The reason for a stopover in the Azores was equally simple. It was a logistical solution to the dilemma of getting two couples, one from Texas and the other from Maine, to a destination half a world away at the same time. In checking flight schedules, we found that Azores Airlines allows a no-extra-charge stopover in the islands for travelers who book a flight from Boston to Lisbon. We couldn’t say no to that! Besides, we knew no one else who had previously visited the Azores.

It is said that each of the nine islands in the archipelago has a distinct personality, as well as the similarities of black volcanic stone, pleasant climate, hot springs, whales and dolphins in the surrounding waters, and no shortage of friendly people.

The Azores are part of an island group that stretches across about 370 miles in the North Atlantic. They have been known since the 14th Century and were depicted on early navigational charts, notably the Catalan Atlas, drawn in 1375.  Today, the Azores constitute an autonomous region of Portugal, as do several other island groups.

Life is lived simply on this island. Tourism is increasingly important to the economy; some major cruise lines have added calls to Ponta Delgada to their itineraries. Traffic is manageable, even in the largest city. Ubiquitous “roundabouts” regulate the flow of vehicles, rather than traffic lights. Driving the island’s highways and back roads, we never heard a horn; nor did we see an accident, or encounter any speeding.

The architecture is unique. Black and white churches seem unlikely and jarring at first encounter, then beautifully appropriate. They are visible from far off in the craggy landscape, even on the slopes of steep hillsides. Every village has at least one, and they seem just waiting to be explored. 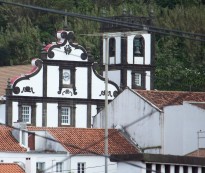 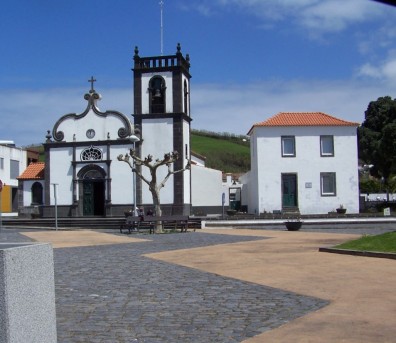 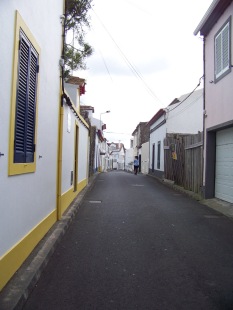 Apart from the churches and an occasional impressive municipal building, predominantly low-slung homes and buildings grace narrow streets. Some have colorful stucco walls and clay-tile roofs; others are white with simple metal roofing. Most homes and public spaces display colorful, lush flowers and gardens. Commercial buildings are typically functional and nondescript. Congregated in larger “warehouse-like” structures, “one-stop shopping” seems convenient and efficient for groceries and the basic needs of daily life, including clothing, electronics and banking.

A charming introduction to Portugal

Green hillsides, terraced and manicured, grace the landscape; the sea is everywhere close at hand, and there is an almost total lack of hustle and bustle. 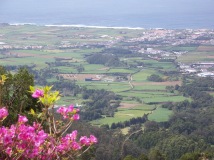 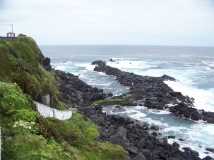 The cadence of life is comfortable. People stop to chat along the streets, or sit on seaside walls and benches just to enjoy the sunshine and the sounds of crashing surf. Locals smile at strangers, and everyone we encountered was helpful, despite our trouble with pronunciation of Portuguese words. Diners linger over lunch, and waiters never present a bill unless asked for one. Restaurants close for the afternoon, reopening again around 7 p.m. for dinner. Getting around is easy, if confusing at times, but getting lost on a small island is almost impossible.

Three days on Sao Miguel were not only a suitable introduction to Portugal, but an open invitation to return. Because of the location along the Atlantic gulf stream, the climate is moderate, and Azorean vacations have been perennially popular with British and European vacationers. Although we did not see all that the island offers, we understand why travelers return again and again to savor island life. 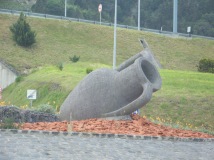 The appeal extends beyond the natural beauty and the welcoming vibe. There is an ambience that exists only in rare places. We all felt privileged to enjoy a few days on a unique volcanic island. I, for one, would be happy to return to the Azores, and I heartily endorse the stopover offered by an accommodating airline.

Note: We arranged our stay at Casa da Cancela in Vila Franca do Campo on San Miguel Island through booking.com, and found the property to be exactly as described. Based on comments by other guests, it consistently lives up to its ratings, and we do not hesitate  to recommend it. Although I book lodging often with this company, I am in no way connected, nor do I receive consideration in any form from them, from the airline, or in any other manner for the mention.