Note: At about 6:30 a.m., British time, on July 7, 66 years ago, a brand new ocean liner set a speed record by steaming across the North Atlantic in just three days, 10 hours and about 40 minutes. It was the maiden voyage of the SS United States. The return voyage to New York Harbor set another record. It was a feat never to be duplicated.

My love affair with ships and with the sea began a long time ago. It continues.

Ships old and new, large and small; sailing ships and historic steamers; lobster boats and shrimp trawlers; pirate ships and submarines, military ships and cruise ships; private yachts and fast powerboats all find treasured places in my mind and memory. And, by extension, so do airships and spaceships, classic automobiles, muscle cars, locomotives, freight trains, and the Orient Express.

If you note the recurring theme in this blog, it’s not by chance.

On May 8, my husband and I had a unique and wonderful experience. We joined a group of ship enthusiasts on a cruise to Bermuda. This group, however, was not just any old band of ship-lovers. Termed the SS United States Legacy Cruise, it was conceived and planned by the SS United States Conservancy in cooperation with the Pollin Group (travel planners) of Chevy Chase, MD. The 70 or so individuals who participated all have a connection — in one way or another — to the last of America’s flagships, the former ocean liner that now sits forlornly at a Philadelphia pier awaiting an unknown fate.

The ship that set the Atlantic speed record sailed the seas for only 17 years. The record-setting Atlantic crossing commenced in New York City on July 3, 1952. The SS United States arrived in England only three days, 10 hours and 40 minutes later, breaking the Eastbound speed record formerly held by Cunard’s Queen Mary and capturing the Blue Riband Trophy. It was an achievement never thought possible by a ship of that size, and it is still unsurpassed today.

Read about that crossing, and watch a video about that historic voyage.

What became her last Atlantic crossing, in November 1969, was an unexpected event.  Indeed, a 16-day cruise of more than 8,000 miles was on the schedule for the 1969-70 holiday season. Passengers would have enjoyed an exotic itinerary including Madeira, Tenerife and Dakar, as well as a New Year’s visit to St. Thomas in the Virgin Islands on the Atlantic round trip.  Since then, a series of owners has alternately explored plans to put the ship back in service or threatened the scrap heap.

The Conservancy, led by Susan Gibbs, granddaughter of the ship’s designer, is the current owner, with a mission to see her restored and rejuvenated — not to carry passengers — but rather to assure that succeeding  generations of ship-lovers will be able to explore her cavernous interior and learn her unique story.

It is quite a story

For six days on board the Celebrity Summit, a modern cruise ship, our group heard stories of the SS United States. The ship was built in Norfolk, Va., as a luxury liner in the heady days of mid-Century Modern style. She was aluminum, fast, sleek and lightweight, powered by state-of-the-art propulsion, and said to be unsinkable.

She was, however, a heavyweight in terms of performance, function and appearance. The ship was fully capable of serving as a troop carrier, built during the height of the Cold War era. The illustrious British-flagged “Queens,” Cunard’s luxury ocean liners, ferried troops admirably during World War II. Had the need arisen, the vessel could also have been converted to a hospital ship.

The SS United States was built in Newport News, Va., funded by both the U.S. Navy and the privately-owned United States Lines. She sailed under the American flag and performed exceedingly well as a passenger ship, carrying presidents and dignitaries, film stars and “common folk.” She brought immigrants to the United States and also carried her share of military families, along with their household goods and vehicles, to and from European duty stations. She had speed and agility, numerous luxury features, a fully-equipped operating room and a modern pet kennel with a resident veterinarian. 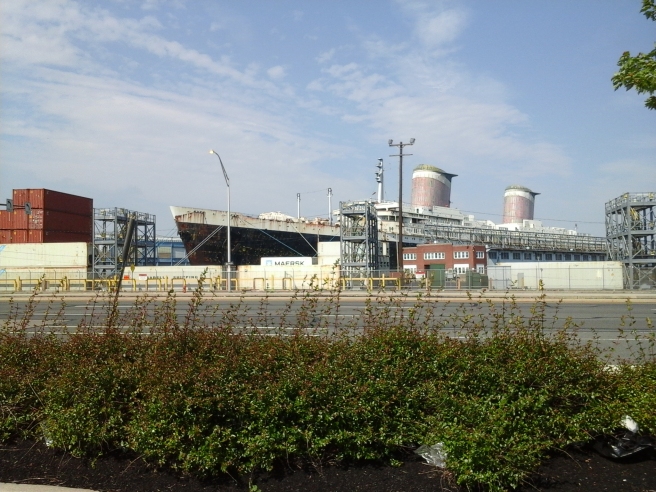 Today she sits with peeling paint at a pier in Philadelphia, her interiors stripped and her props missing, awaiting her fate. One of her caretakers, Mike Wolfe, who says he is familiar with “every inch” of the old ship, notes that she still has a grandeur and mystique about her. He is protective of her because, as he says, she is still beautiful. “This ship has a soul,” he insists.

We watched the Statue of Liberty and the New York skyline recede from view as we made our way out of Port Liberty in Bayonne, N.J., finding it impossible not to think of those long-ago embarkations and arrivals. It is said that William Francis Gibbs never missed the chance to see the SS United States as she departed and returned to pier, watching silently from shore. With two massive stacks and a distinctive color scheme, she must have dominated the view.

The ship was in many ways the designer’s obsession, although he only sailed on her once, on that record-setting maiden voyage. It had been Gibbs’ long-standing dream to design a ship that was 1,000 feet long. The SS United States measured 990 feet in length; from keel to the top of the forward funnel, she rose to a height of 175 feet.

By the end of the week, those of us on this first Legacy cruise had become “old friends.” Steeped in the lore of the ship, we shared our individual reasons for wanting to save her, and those who had sailed on the ship enthralled us all with their memories. Among our group were former passengers and crew members, friends and family, movie-makers and ship designers, scuba divers and armchair travelers, young and old.

In addition to the formal presentations that kept us all busy, we dined together and met informally, bound by joint commitment to this iconic ship. We spoke as well of other ships and other seas, and found we shared other common interests. Once we arrived in Bermuda, our group was treated to a special tour of the National Museum of Bermuda and its park-like grounds. We enjoyed a lunch at the well-known Frog and Onion Pub at Royal Naval Dockyard. We had ample time for private exploration and time to enjoy welcome sun and warmth after rainy days at sea. Bermuda’s beaches are stunningly beautiful, its island ambience delightful, and its people welcoming!

Serious Efforts to Save a Ship

Current work to assure a bright future for the SS United States continues in earnest. According to Susan Gibbs, it is bearing fruit. Even though she declined to discuss specifics, she noted that solid opportunities exist.

One of the highlights of this Legacy cruise was the presentation of a sizable check to the Conservancy. Dockage at the current pier in Philadelphia is expensive and there are ongoing preservation efforts. If you’re interested in learning more about the SS United States, or about ways to help assure the ship’s preservation and redevelopment, visit the Conservancy website or follow SSUSC on Facebook and get involved.

There are many ways to help: I would love to hear from anyone who has any sort of personal connection or recollection to share. In future posts, I’ll write more about the  people I met during this cruise to Bermuda and tell more stories about the SS United States, interspersed with more stories about the faraway places that the ships, planes, trains and automobiles that so spark my imagination can tell us all.

Meanwhile, if you’re traveling to New York between now and August 3, don’t miss the exhibit currently at the National Lighthouse Museum, Staten Island.