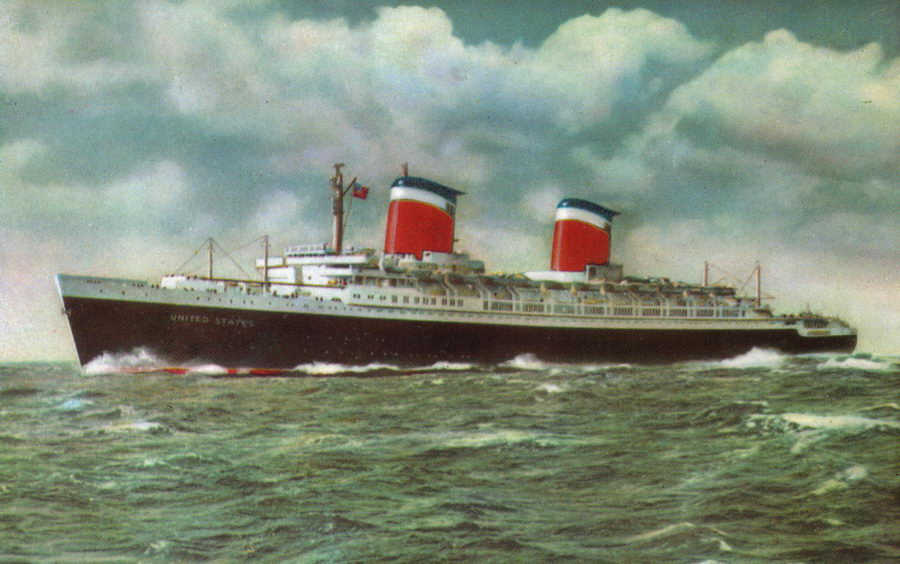 A long-ago time, and in faraway places, the S.S. United States was a bright and shining example of American ingenuity, achievement and spirit. She is still grand and imposing, but her shine has given way to age; her paint is peeling, her interiors are empty; she has suffered greatly from years of sitting still.

There are those of us who would dearly love to see her live on, to enjoy another incarnation so that present and future generations could be awed by the sight of her — her size, her beauty and her story.

But, I fear that is not to be.

Three news networks this week have told her story. Those who are desperately trying to save her say that the deadline is near – maybe less than two weeks away – when they will be forced to give up the fight. Rent alone at her dock costs $60,000 a month, and before Christmas this year, the money will have run out.

Susan Gibbs, executive director of the conservancy that is seeking a benefactor, says the end of October marks the deadline. After that, she notes, negotiations with a “responsible recycler” will begin. This is not a new development, but it is no less disturbing. The ship has faced the wrecking ball before. But she has, in the past, been granted a “stay.”

For Ms. Gibbs, it’s personal. She is the granddaughter of the ship’s designer, naval architect William Francis Gibbs.

It’s personal for me too.

In a very real sense, the U.S. United States was a matchmaker; she was the reason I met my future husband almost 50 years ago.

At that time, she had been called into service to help move American servicemen and their families out of Europe, and specifically to move them home from France. She was still carrying paying passengers as well, but in some cases, American military families made a five-day passage to New York aboard this swift liner. They ate in the elegant dining rooms, were served by impeccably uniformed staff, and experienced a lifestyle that only a few tourists of the time shared. Luxury ocean liner travel then was the domain, for the most part, of the rich and famous.

But when General DeGaulle of France decreed on March 10, 1966, that foreign military in his country must withdraw or submit to French control, a massive logistical effort began almost immediately to relocate military families. The one-year deadline loomed large; time was of the essence. Even though air travel could accommodate the humans, shipment of household goods and automobiles had to be by sea. At the time, utilizing available staterooms and the cavernous below-deck holds of this great ship made a lot of sense.

So it was that the paths of one young U.S. Army lieutenant and one young working journalist converged one day on a dock in Le Havre, France. He was newly-assigned to help meet the deadline, charged with the responsibility of scheduling military travel and moving belongings. I had a story to write about the huge effort.

No, it wasn’t romantic; we were not her passengers. But she loomed large on the docks in Le Havre as we looked along her more than three-football-fields length and up at her 12-stories above-the-water countenance.

Just a little more than one year later, when there were no military personnel left in France, it was largely due to the S.S. United States and the numbers of people and tons of belongings that she transported back to American shores.

Yes, she was impressive then.

She is still impressive now. Her peeling paint and her empty decks do not detract from her presence and her lines. She still looms larger than life, even though she has sat silent far longer than she ever plied the seas. She was in service only from 1952 through 1969, silenced when she was only 17.

My personal story continues with her. In another tale of endings, my parents considered themselves fortunate to be among her passengers on a scheduled North Atlantic crossing in November 1969. They enjoyed the experience immensely, and they disembarked in New York. The ship was bound for Newport News and a refurbishing “furlough,” but she never returned to service. My father thought it ironic, in his later years, that he had sailed on one of the last troop-carrying voyages of Cunard’s Queen Mary, as it ferried American servicemen home after World War II, as well as on the final crossing of the S.S. United States.

The rebirth of cruising vacations came too late.

Today, the irony is that more people than ever before take to the sea for vacations. Cruising ships have grown larger, accommodations more deluxe, and onboard amenities overwhelming. The S.S. United States was the last American-flagged passenger vessel afloat. She was also the largest ship ever to be built in the United States. She is substantial even by today’s standards, although her passenger load was not quite 2,000 in 692 staterooms, with a crew of just over 1,000. But, she had a distinctive look about her, with two stacks towering almost 65 feet above her decks. And she was fast. She remains the Blue Riband-Hales Trophy winner. She set the speed record for crossing the North Atlantic on her maiden voyage in 1952, snatching it away from the Queen Mary. It has not since been broken!

Both Cunard’s Queen Mary and the S.S. United States were known for elegance and speed. Both were designed for passenger comfort, but built to carry troops in case of need. Both served well. Both today are listed on the National Register of Historic Places.

View a slideshow of the S.S. United States.

There the similarities, unfortunately, end. The Queen Mary is now a popular hotel and tourist attraction in Long Beach, Calif. The S.S. United States rots at the dock in Philadelphia.

Surely, she too has value as a destination resort, a museum, an office building, a shopping center, or a funky condominium development. Or, am I just out of touch with reality?

I will continue to hope. Yes, it’s very personal.