Note: Today is Election Day; the midterm elections in the United States have been much in my mind over the last week as I attempted to gather my thoughts about my recent short visit to Havana. On my way to vote this morning, I remembered how one young Cuban attempted to explain his country’s elections. They are very different from ours. This CGTN America explanation of the recent Cuban election (and an overall view of the electoral process in Cuba) is an interesting overview. CGTN is one of many international news channels run by China Media Group.

I can’t count the number of times we heard that phrase during our 12 hours in Havana.

Since returning from this eye-opening trip two weeks ago, I have been talking about it frequently, thinking about it constantly, trying to organize my experience into an orderly patchwork quilt of impressions.

It isn’t anywhere near complete.

The pervasive reality is that Cuba is at a crossroads, buffeted by winds not of its making. Change is in the air, even though there is no consensus about the direction of that change, or about how and when it will manifest to create a new climate for the country and its 11.5 million people.

We asked a lot of questions. We were, in many ways, surprised by the answers, even more surprised that those we met were open about their views and willing to answer all our questions.

We wanted a capsule view of what daily life is like in Cuba. We didn’t get that. What we realized is that individual lifestyles vary within Cuba just as they do in the United States. Somehow, I had not expected that. I was hoping my impressions of Cuba would be easier to sort through. I expected a sort of sameness from this Communist country. That is not at all the case.

Much of the city is beautiful, if old and somewhat unkempt. Other areas are modern. City squares and broad avenues boast art and sculpture, color and design. There are parks, and people flock to them. It’s a city made for walking; however, old cobblestones, narrow streets and many people can make it difficult. There are construction cranes, scaffolds and workers everywhere; and much of the work involves modernizing historic buildings. 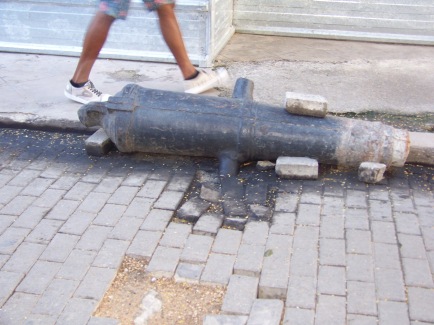 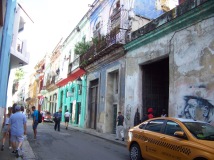 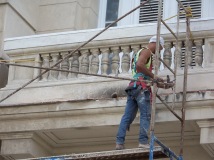 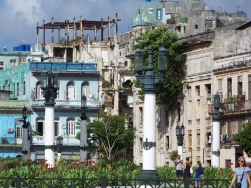 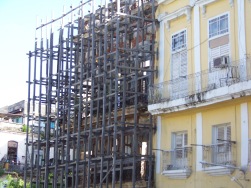 The cadence of life

Fidel Castro, we learned, is still very much a force of daily life, even though he died two years ago, November 25, 2016. It was eight years earlier that he resigned as president, ceding the reins of power to his brother Raul. Now, Raul has stepped down and there is a new president, elected just last year. He had no opposition.

Fidel posters and other reminders of the revolution are still everywhere. Fidel — yes, first name only — is spoken of as a sort of  kindly uncle by some who were born after the revolution and grew up in his shadow. His presence was — and still is — pervasive. We heard alternately that he was a “tough” man, and the “savior” of his country. But his name is spoken with a mixture of awe and fondness. 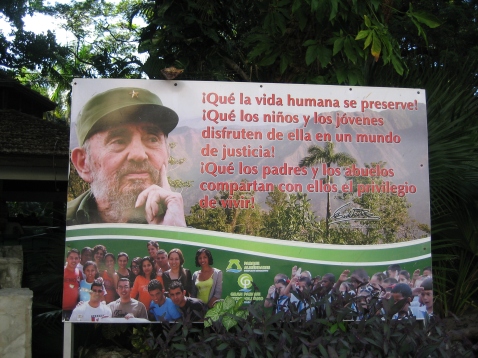 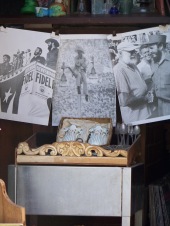 We were told that Fidel did not seek power for himself; and it has been written that he did not want a “cult of personality” to surround his memory.

His ashes are entombed in a simple, but impressive 10-foot-tall boulder in Santiago, in a cemetery that he shares with the first president of Cuba, along with other well-known citizens. It is at the eastern end of the island near his family home, and there is a metal plaque that reads simply “Fidel.”

However, Cuban citizens, tourists and world leaders alike visit the site regularly, sometimes as many as 4,000 a day. Every 30 minutes, there is a military ceremony, a changing of the guard, that honors both Fidel Castro and 19th-Century Cuban patriot and revolutionary Jose Marti.

The reality of Cuba today

Young people we met recount the history of their country accurately and easily. Events from two or three decades before their births seem very real to them. They also speak of Cuba’s earlier history with pride, and most argue that, despite its imperfections, life is better today than it was prior to Fidel, even though those we met did not live through their country’s revolution.

Some older citizens were perhaps a bit more guarded in their responses to our questions, but still quite forthcoming about their lives.

Cuba is a poor country, as they freely acknowledge, but a proud one. Food, shelter, medical care and education are provided. Family is important. Material wealth, they claim, is not. Crime is almost non-existent; drug use is low, but punishment can be stiff.

Tourist trade in Cuba is big business. Today, we were told, Americans constitute the majority of foreign visitors. Surprised? We were! Everyone we met was welcoming — helpful and congenial, often greeting us with smiles and wishes for a good day.

One older woman asked, in Spanish, if I was American. When I answered yes, she took my hand and thanked me for coming.

Reuters reported this week that Cuba’s economic growth forecast has been lowered to just one percent for the year, and that austerity measures are to be instituted. Lower than expected revenues from tourism are partially responsible, but so is a decline in GDP income from sugar and mining. Trade uncertainties exist between Cuba and Venezuela, and economic growth is uncertain.

English is taught in school to even the youngest children. We neglected to ask about other languages. There is no obvious language barrier.

News is filtered, according to our guides, even though it may not be directly censored. “We hear only bad news about the United States,” said one. Another told us of a relative who lives in Houston, and of how he would like to visit. Although it is not prohibited, he added, visas and monetary regulations make travel cumbersome, expensive and unlikely. Still, he said, he hopes one day to be able to travel beyond Cuba’s borders.

Cubans have cell phones, but they may often be without toilet paper. They enjoy afternoon mojitos , but they may have to do without water, for both drinking and other household use. A trip by bus between Havana and the eastern end of the island can take 20 hours.

“We do not have cars,” explained our guide when we asked about finding parking places in crowded Havana. And those vintage American cars: They are not often privately owned, said our driver. There are many ways to get around, though.

In fact, the red Thunderbird that we enjoyed during our afternoon tour is normally a taxi and will be out of service next month for repairs. That, unfortunately, means that our driver will be out of a job until the refurbishment is completed. He is not worried; his basic needs will be taken care of as always.

The state provides for those basic needs, but shelves are often devoid of even routine products to meet those needs. Rationing of food staples is a way of life. Foreign goods are rare, said another person: “What we buy is produced here in Cuba.” 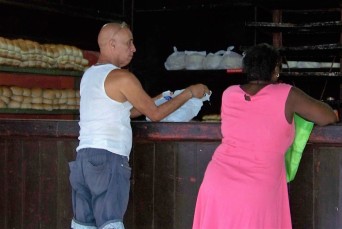 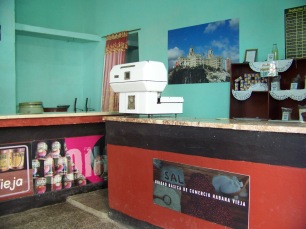 A number of products are exported. Rum, cigars, coffee and sugar, for sure; we guessed at the rest — citrus fruits, rice, corn and beans; fish and shellfish. However, the trade deficit is significant.

We encountered only one small street market, and a single flower seller.  But we did not have a lot of time to explore. 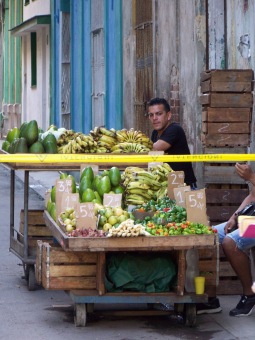 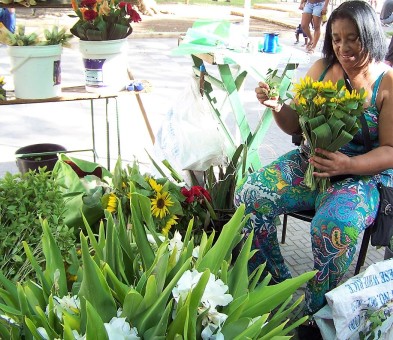 There are few luxury goods in Cuba. Even though smart phones are common, widespread internet is not.

The Cuban people are not exactly isolated from the rest of the world, but they are definitely not affected in any obvious way by the culture of a country only 90 miles away. Cuban culture is unique; in my short experience, it is totally different from anyplace else on the globe.

Life moves at a different pace in Havana.

Our day in the city brought us many new insights, and a lot more questions. We left with the conviction that the “cultural exchange and understanding” requirements are in place for a very good reason. Indeed, that may be the best part of the Cuban experience for Americans. Maybe it should be a worldwide travel requirement. If you’re interested in visiting Cuba on your own, there is a wealth of information available to help you plan a trip. Will we be returning? Perhaps.