Fireworks over the water are a traditional part of July 4th celebrations in many parts of the country. Fire risk seems lessened, and exploding colors and sounds seem magnified by rippling water below and starry skies above. We have enjoyed such displays many times, watching with as much awe as any child.

A bit of background

Several years ago, as we made our way by boat across Chesapeake Bay and into Baltimore Harbor, we noticed an unusual buoy — not the normal red or green of navigational markers, not a warning orange — but rather red, white and blue.  At the same time, we couldn’t help but see the flag fluttering in the breeze at historic Fort McHenry, situated on a peninsula that intrudes into the Patapsco River not far away.

We later learned that the U.S. Coast Guard sets a ceremonial marker annually to mark the approximate spot where the words to the Star Spangled Banner were first written.

The unique buoy and an oversize flagpole brought home to us that year the reality of the battle that shaped the destiny of a young nation. History is like that — it sometimes takes being there to make it real.

The War of 1812, which began because of trade disputes and issues surrounding westward expansion, escalated when ongoing battles between Britain and France waned. It was a devastating time for a young country, and there were serious doubts about the ability to survive as an independent nation.

Much of New England never joined the fight. And, by the time it was over, the “second War of Independence,” as it is sometimes known, resulted in the deaths of 15,000 Americans, nearly as many as perished during the Revolutionary War. The War of 1812 actually lasted for two years and eight months.

Putting it in perspective

The fighting at Fort McHenry took place September 13, 1814. By the time the battle was brought to Baltimore, the war was all but lost. Washington, D.C., including the White House, the Capitol and other government buildings, had already been burned. 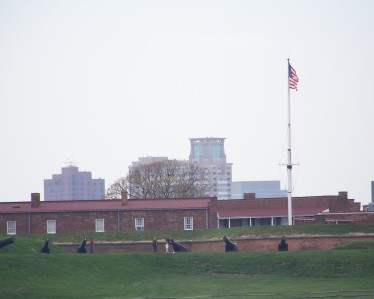 This past May, on a trip to Bermuda, those events of 1814 became even more real. It was from this Atlantic island some 600 miles offshore that a fleet of British warships was launched on August 1, 104 years ago, carrying 5,000 British Army and Royal Marines troops. Even though the colonies had declared independence nearly 40 years earlier, the British had not yet given up.

It was at Fort McHenry in Baltimore Harbor that the tide of war changed; defenders fought off the British during more than 25 hours of intense bombardment.

During the fighting, a young attorney was detained on a British ship in the harbor, along with a physician whose release had been promised. Francis Scott Key, sometime poet as well as a lawyer, had negotiated a prisoner exchange with the British, set to occur after the battle. As the fighting ensued, he was inspired to write the words to a poem which was set to music, with the title Defence of Fort McHenry. Later Francis Scott Key added three more stanzas, all but forgotten today.

The Star-Spangled Banner, although popular, was not used ceremoniously for another 75 years. In 1890, it was adopted by the U.S. military for play during the raising and lowering of the colors.

Touring the Royal Naval Dockyards this spring on the island known to its residents as “the Rock” or “Gibraltar of the West,” we actually thought little about Baltimore or the War of 1812. Instead we were focused on British history and maritime supremacy, until a chance remark brought back the memory of Fort McHenry, the flagpole and the buoy.  We toured the grounds of the British naval compound, walked the ramparts, and imagined those ships sailing towards Baltimore to quash yet another rebellion. With that clarity of perspective, we realized once again that we are still a very young country!

It surprised me to learn that Independence Day was not even a holiday to celebrate until 1870, nearly 100 years after the Declaration of Independence was drafted, and long after its authors had passed on.

It surprised me equally as much to learn that the song written by Francis Scott Key was only adopted as the National Anthem by presidential order in 1916, just more than 100 years ago. Congress made it official only in 1931. The anthem made its official debut at a sporting event, a baseball game played in Chicago in 1918, during the turmoil of World War I.

And the fireworks? Well, that part of the celebration was added only after the poem was written and the song was performed.

None of that, however, diminishes the fun — or the spectacle. No matter what else occurs on the 4th of July, whether there are parades or solemn ceremonies, barbecues or backyard picnics, swim parties, bicycle runs or Days at Six Flags, it’s the fireworks that encompass the spirit of the celebration.

But, lest we forget, independence had a cost. It still has. The fireworks that are so much fun today were deadly serious in 1814. So, as we celebrate, perhaps we should also consider just what independence means, and what price each of us is willing to pay to preserve it.

Stay safe, everyone, on this 4th of July, and enjoy your celebration, no matter what it is!

If you’d like to learn more, here are some resources: