Several years ago I wrote a column about rubber duckies, discussing the pervasive fascination with that familiar childhood bathtub toy. Who doesn’t love a rubber duck?

A personalized rubber duckie was one of the first gifts I bought for my grandson — that turned into a progression (and a collection) of rubber duckies of various colors and costumes. The obsession spilled over into gifts for my then high-school-teacher son (Professor Duck) and various other family members, and ducks for each succeeding holiday. Then, like other enthusiasms, my duck-gifting phase ran its course to echoes of “Enough, Mom, enough.”

Rubber Duckies are available in all sizes, a few varied shapes, numerous colors and with all sorts of “costumes” and personalities.  However, the perennial favorite is still the yellow version, with bright orange bill and black eyes. Many collections feature “one of a kind” or limited-edition duckies; Stories are circulated about duck adventures, and tales are told of lost or rescued ducks.  Ducks are used in NASA glacier-tracking experiments, and there are still sightings of some of the group of “globe-trotting” ducks that “jumped ship” in the Pacific in January of 1992.  Really.

Rubber Duck Races, generally to benefit local charities, are held from Seattle to the Ozarks, from Washington, D.C., to Crested Butte, from Texas to Tahoe.  One of the largest duck races is in Hawaii, and some of the most informal are held in small town creeks, canals and swimming pools.

I am still tempted when I see an especially appealing little duck in a store window. And I gasped with delight at news photographs of the giant rubber duck “paddling” its way through Lake Superior at the recent Tall Ships Festival in Duluth, Minn.

So, imagine my surprise when I encountered a stylized rubber “duckie” with mane and tail in the middle of Virginia horse country during this summer’s road trip. 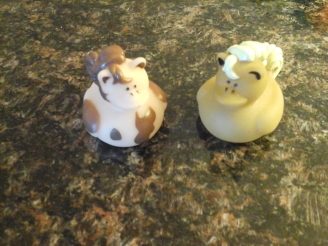 I was immediately smitten, not only with the little rubber horsie that perched on the edge of the Lexington motel room bathtub, but with the motel itself. After the whoops and the grins — and the picture-taking — I thought about the marketing genius that played to the playfulness of tired travelers.

The clerk was accommodating, more than willing to let us pick a mate for our little rubber traveling companion, only exacting a promise that we would honor the commitment to snap pictures as we traveled on. That we did, and the little horsie-ducks happily sat on the dashboard — a pair of cute mascots — for the next 3,000 or so miles of our journey. They traveled through city traffic, along country roads, into Quebec and Ontario, skirted along several of the Great Lakes and sat under the Gateway Arch in St. Louis. It proved, I think, that we are never too old for a little silliness in our lives.

Our little companions abandoned their perch on the dashboard when the temperature soared regularly above 100 degrees back home in Texas. But you can be sure that they will accompany us once again when we take to the road for another adventure.

Rubber duckies don’t take up much space or make a mess; they are exceedingly patient and compliant travelers, requiring no food or special accommodations. But they did, do and will continue to make us smile!